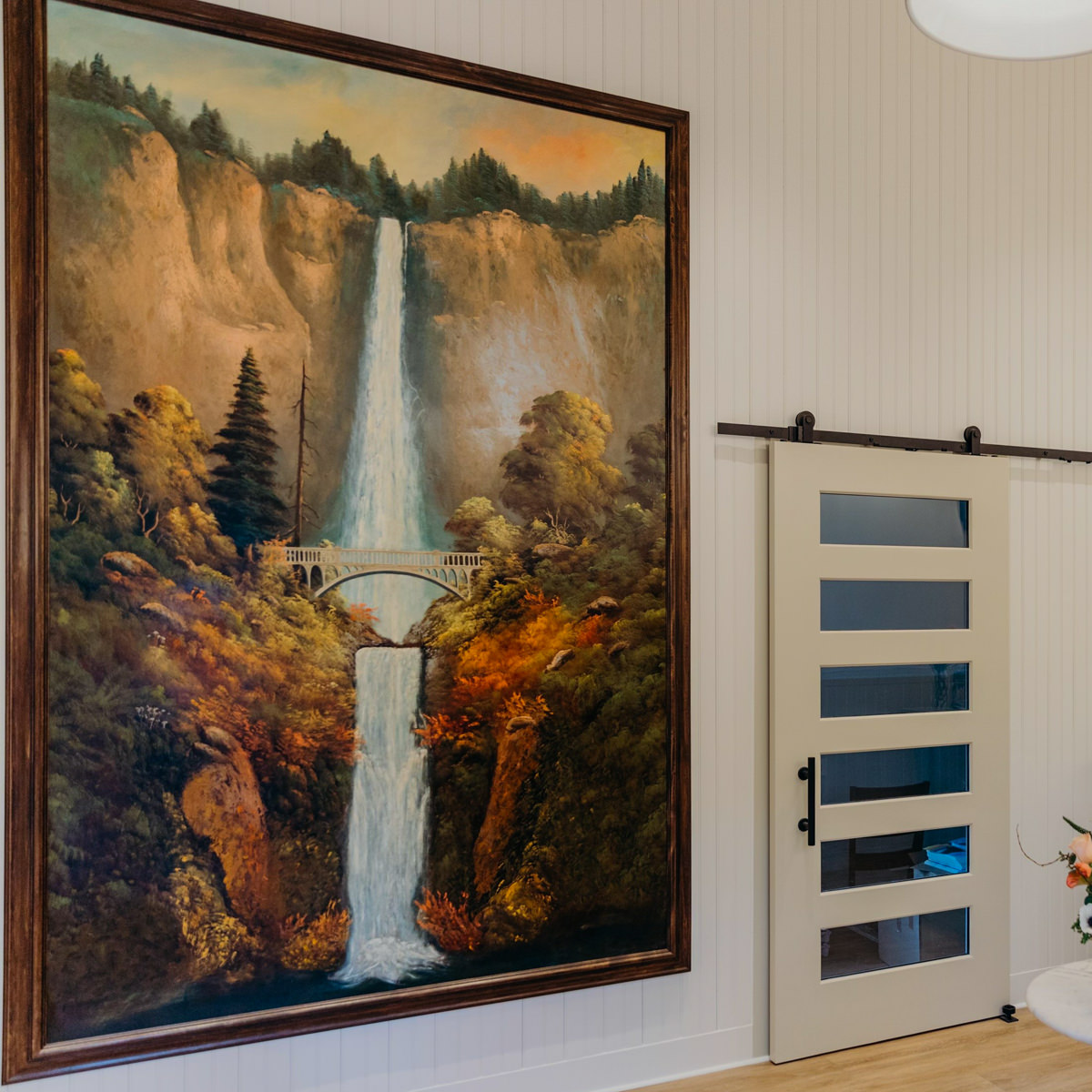 The moment you enter the new Gateway to the Gorge Visitor Center, you will be greeted by the stunning restoration of a century-old painting of Multnomah Falls. As the building it now resides in has a compelling history, so too does the painting.

This grand piece of Troutdale history measures 10 feet high by 6 ½ feet wide. It was painted by Hazel Alpha Harris of Vancouver, Washington, c. 1912 after having been commissioned by the Multnomah Hotel in downtown Portland. The painting hung prominently in one of the hotel's banquet rooms.

In 1929, as the hotel was undergoing a major remodel, the owner gave the painting to the Butler family of Troutdale. The painting hung in their home until 1953 when space requirements led to another relocation: into their garage. After a quarter-century of less than-ideal-storage – folded in half and kept on it's side – the painting was donated to the City by George and Eloise Butler and repaired by Rev. James Parten. The painting graced the walls of the newly remodeled City Hall for more than 30 years.

When old City Hall was closed in 2012 due to foundation and structural issues, the venerable painting was removed from the old building for safekeeping. A large vault was constructed in a wall of the City Conference Building where the painting remained until 2021. After being carefully removed from it's storage area, it was meticulously restored over the course of several months by expert art restorer Susan Scott-LaRue.

Upon completion of the restoration, the next step was to give the painting a frame it deserved. But since 10-foot frames are not exactly stock items, the new frame had to be custom milled. Donna Erwin, owner of Columbia River Gallery and an award winning framer, then hand-finished and assembled the frame. Finally, a company that specializes in moving and hanging large art pieces for museums brought the painting to it's new location. 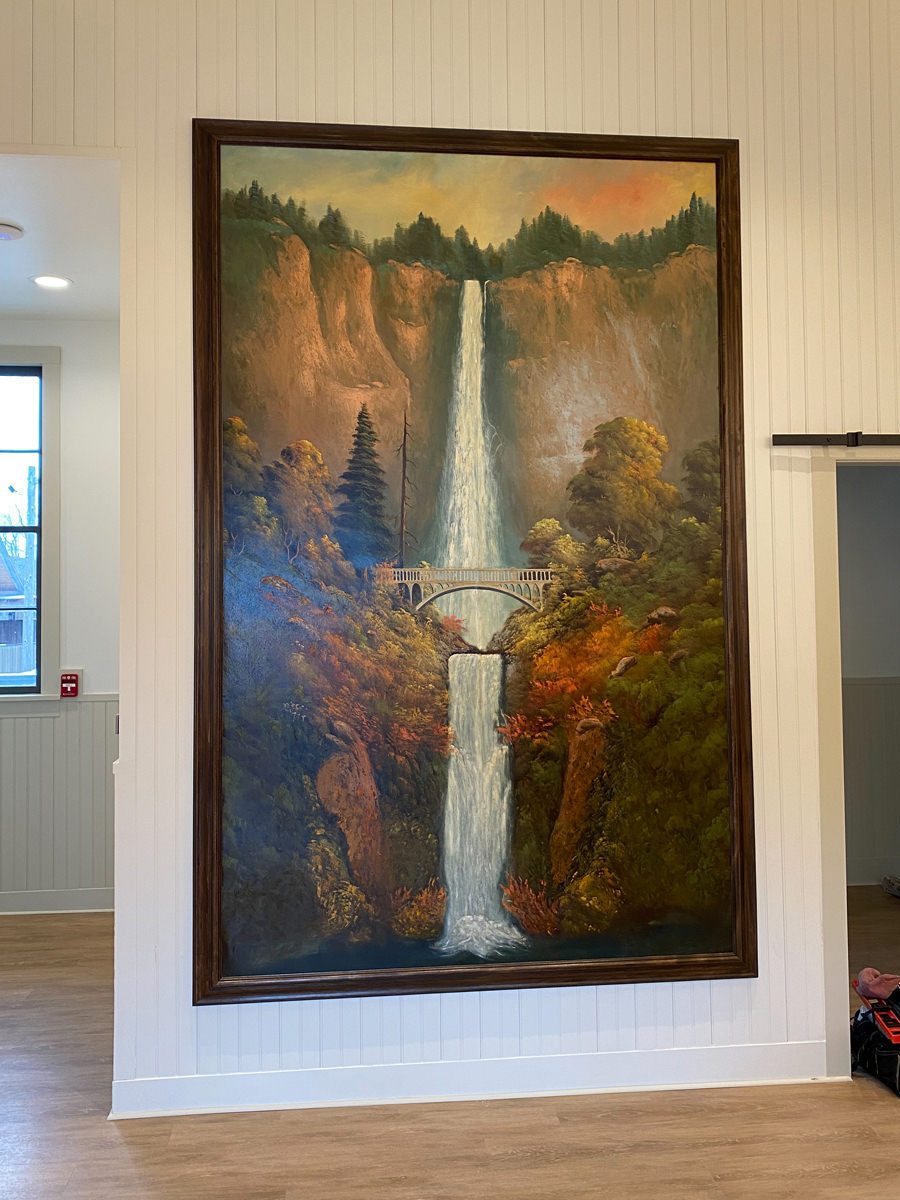 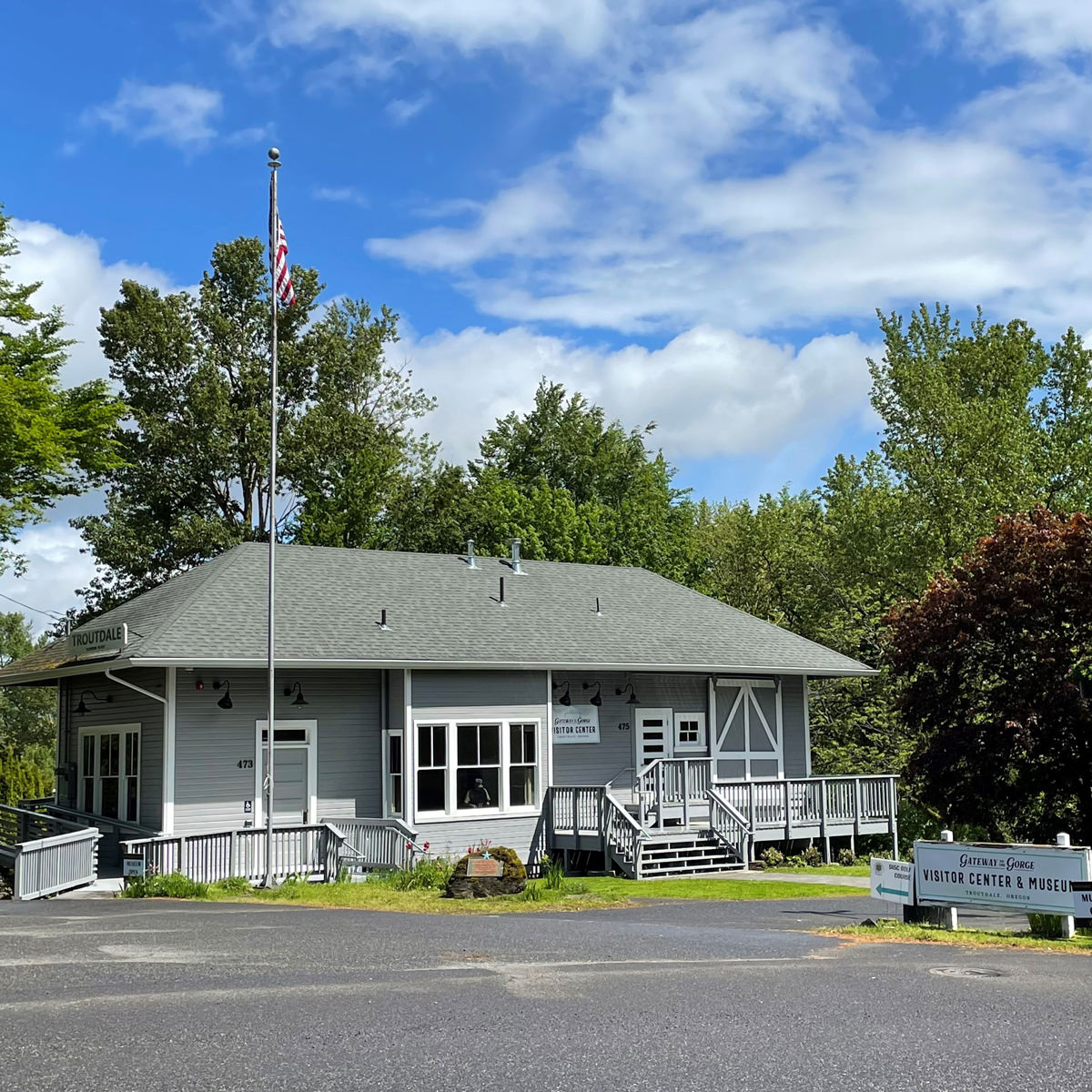 Gateway to the Gorge Visitor Center

Sep 23 2022
The Gateway to the Gorge Visitor Center is located inside Troutdale's historic rail depot building at 475 E. Historic Columbia River Hwy. It provides tourists and residents a place to learn more about Troutdale and the Mt. Hood and Columbia River Gorge region, one of the seven Travel Oregon regions acros...Continue Reading 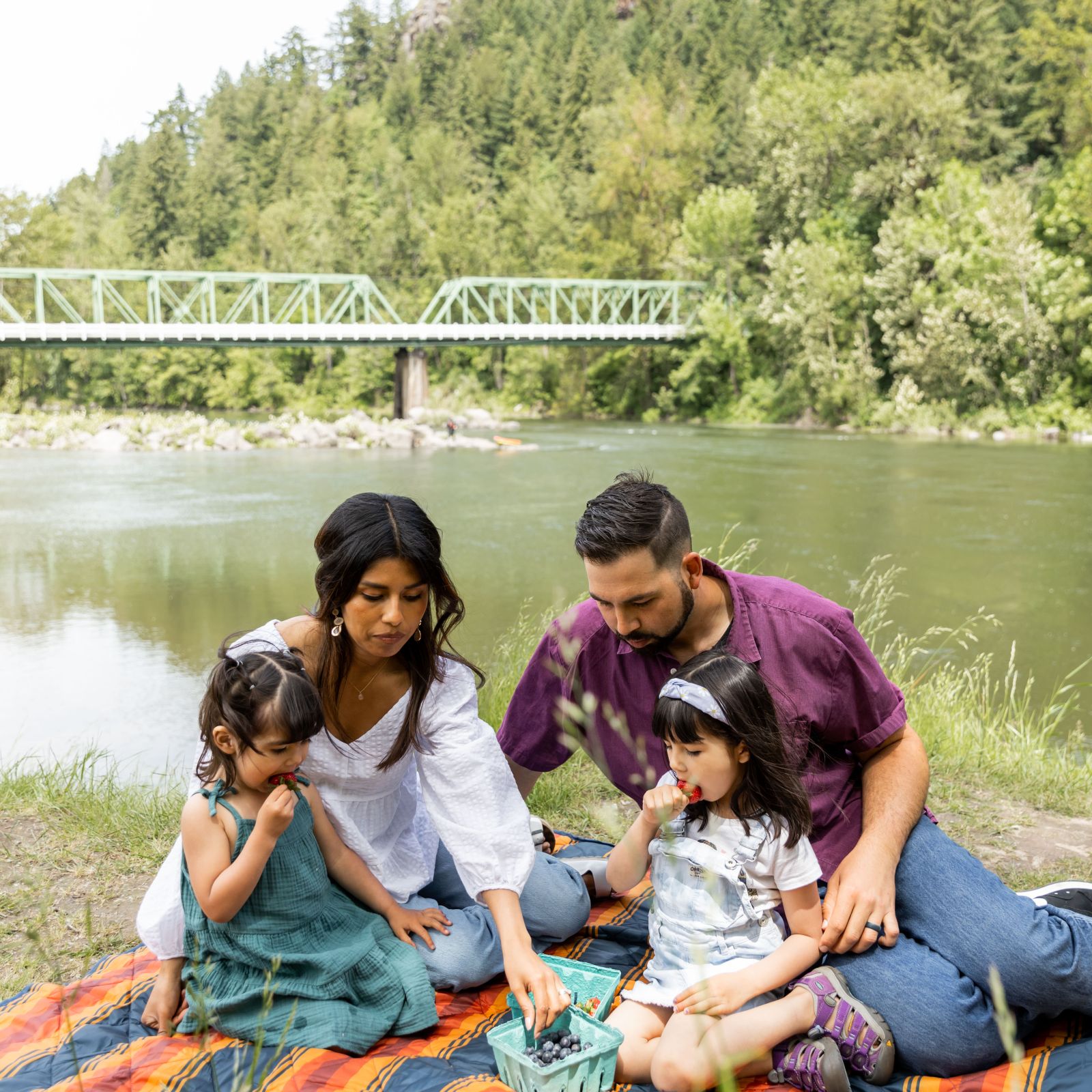 Aug 24 2022
Oregon may commonly be known for its abundance of rain but fortunately, this produces scenic towns immersed in luscious green forests. To get fresh air outdoors and appreciate the state’s natural beauty, try out a picnic at one of Troutdale’s many beloved community parks! Maybe take on the challenge o...Continue Reading 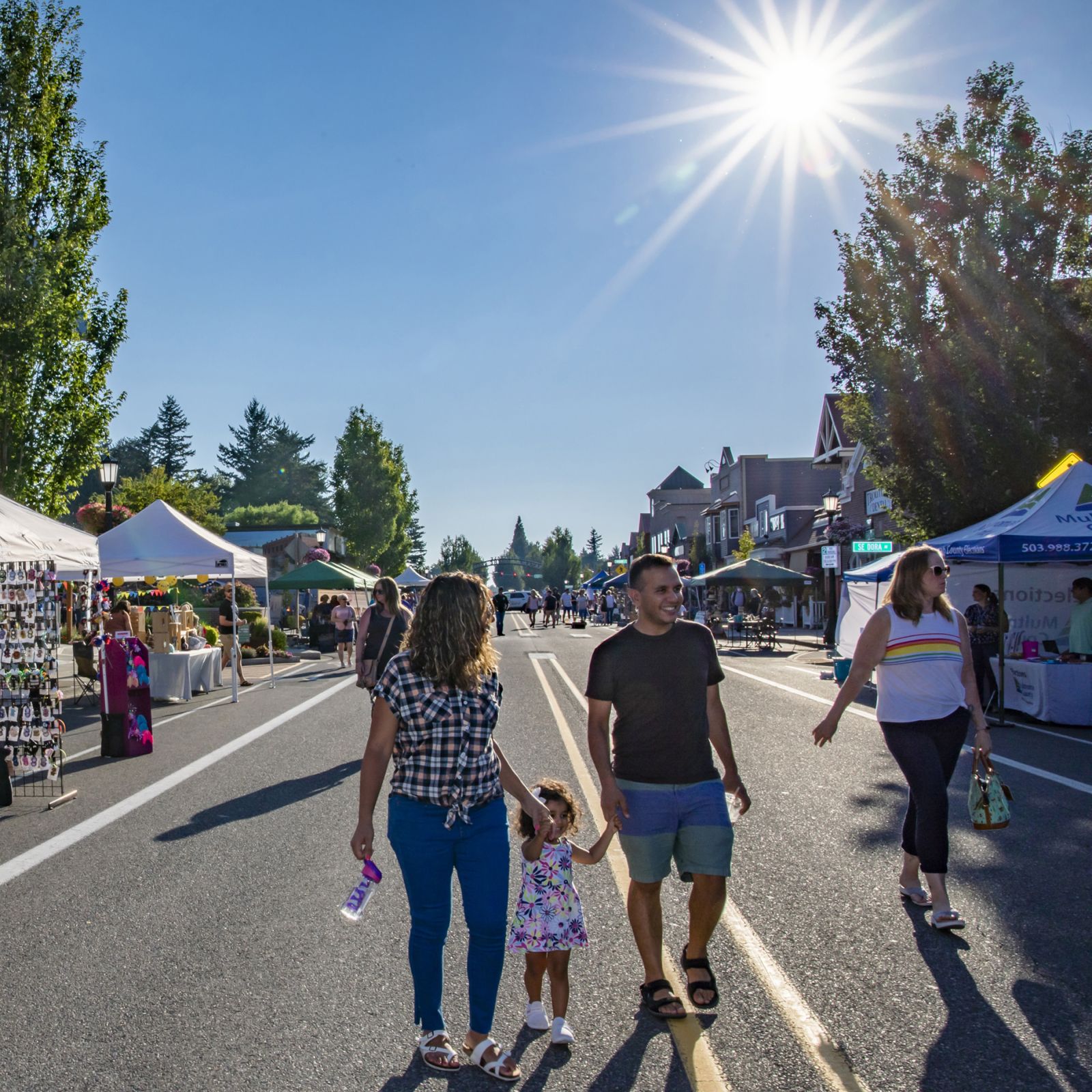 May 6 2022
The First Friday of each month has long been a cornerstone of Troutdale’s art community and the businesses in our downtown. For nearly 20 years, the First Friday Art Walk has brought people together to experience what Troutdale has to offer. The event returns on May 6 and continues o...Continue Reading

Troutdale is more than a simple waypoint as The Gateway to the Gorge. The town has a thriving downtown with walkable streets lined with unique stores, art galleries, museums, warming coffee shops, local breweries and a range of restaurants for visitors of all ages.

Troutdale’s family-friendly charm can be felt throughout, from the unique lodging at McMenamins Edgefield Resort to the relaxing parks sprinkled throughout town, as well as the opportunity to relax and recreate along the Sandy River itself.

Many quality establishments offer the perfect meal, delicious snack or drink in Troutdale. Those heading out to experience the Gorge can grab a quick coffee or lunch-in-the-go for their day’s activities, while several restaurants, breweries and other establishments call on visitors to satisfy their culinary palettes in Troutdale.

The Columbia River Gorge is home to the world-famous Multnomah Falls and the Waterfall Corridor, the highest density of waterfalls in the United States. Visitors setting out from Troutdale can easily see dozens of awe-inspiring waterfalls, each of them spectacularly unique.

Troutdale is perfectly situated between the vibrant metropolitan region centered by Portland and the world-class outdoor experiences in the Columbia River Gorge and the Mt. Hood National Forest. As such, it is the best resource for access to each.

Take a day trip along on the Infinity Loop, combining drives along two National Scenic Byways to see some of Oregon's most spectacular and iconic sites.